The Good Marsh Farmers‘On December 1st 1615 the flood broke at about 2 in the afternoon. It has caused massive damage in many places and in Sæd it is reported that 11 people drowned. Also in Rørkjær massive damage is reported. Some residents have been flushed out of their houses. The water stood above the hay in the barns and lots of dead animals from the fields and meadows were floating in the water.’ Up until the great diking there was often storm surges in stormy weathers – these floods were called water floods. It was a flood caused by heavy winds pushing large amounts of water from the sea onto land in the low marshlands with no possibility for it to go back out. Perhaps it was also these water floods that caused the displacement of an entire people like the Cimbric in the Iron Age. At that time storm surges were regarded as punishment from God for the sins of men (‘The Flood’) – in the absence of a scientific explanation.
A sip for work When peasants were working in the field a lunch box was delivered from the farm to them. Modern bacteriology was not yet known, so water was drunk avidly from canals and water holes through a tuft of grass. In this way bugs were filtered off the water. Gastrointestinal diseases were not known by the hardworking Marsh people. However, they had ‘the bearded man’, a hip flask. This contained a dram – snaps, rum, home-brewed beer or the like. Adults and older children alike drank from ‘the bearded man’ when it was passed around in the field. 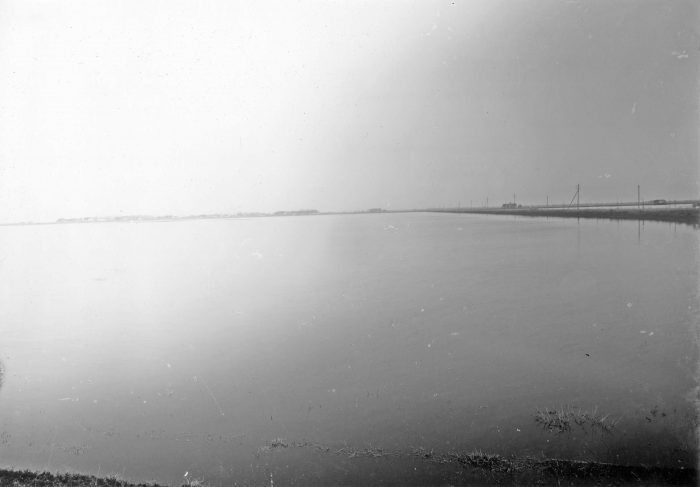 The country road to Sæd, surrounded by water. 1920.